Firstly, by way of contrast, let’s look at why many mainstream weight loss methods often fail. The main, underlying theme of all failures to lose weight or to keep it off once lost is that people don’t stick to their guns. A great weight loss diet is only great for as long as a person can stay with it. As soon as that person stops the diet, any weight they managed to lose will come straight back on, usually with a couple of extra pounds in tow. The same goes for exercise routines and work out schedules. They’re great while they’re being adhered to, but as soon as they’re abandoned, the unwanted extra weight returns.

What many diets or exercise programs don’t factor into their makeup is that people are living, breathing, thinking beings. They are not robots or computer generated characters that repetitively conform to what’s written on a diet sheet or workout routine. People need motivation and inspiration. Often the goal of weight loss itself is not motivation enough, when the means to the end is seen as a chore and not an enjoyable pastime.

Let’s now put things into perspective with regards the validity of dancing for weight loss as a real way to achieve success. Dancing as an activity focuses the body while simultaneously engaging the mind. When you add some up tempo music with its rhythmic beat and memorable tune, dancing for weight loss becomes so much more than other more ordinary forms of exercise. That’s because the music, rhythm and the person’s own dancing movements takes them to a transcendental state which combines uplifting emotions, soothing inner peace and a focusing of their thoughts onto the joy and excitement of what they’re doing in that moment.

Dancing for weight loss is such a positive, enjoyable and uplifting activity while at the same time being a kind of exercise that is both physically demanding and engages many different muscle groups. This way, it does everything a full blown aerobic workout does by raising the heart rate, increasing the breathing and blood flow. This, in turn feeds the muscles that are doing the work which demand more of the body’s stored energy which results in excess fat being used up. This means the body’s metabolism is increased and muscle tone is improved and excess weight is lost.

In fact, by dancing for weight loss a person gets all the benefits that the chore of a tough work out provides. Plus they are more likely to keep doing it because it’s such an enormous amount of fun! 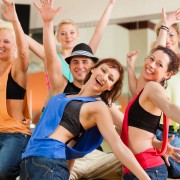 Can you dance your way out of depression?
0 replies

Want to join the discussion?
Feel free to contribute!

Can you dance your way out of depression?

The First EVER Fitsteps Showcase
Scroll to top 7ads6x98y